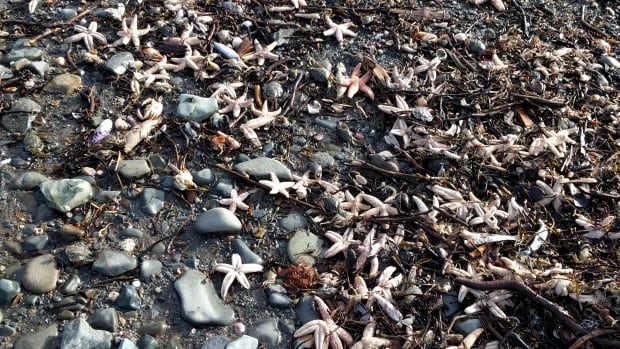 Among the things Eric Hewey discovered washed up on the beach near Savary Park in Digby County were these starfish. (Eric Hewey)
Halifax resident Eric Hewey was home in Digby, N.S., visiting for the holidays when he got a call from friends on Boxing Day summoning him to the beach below Savary Park in nearby Plympton.
“They said we’ve got to come down and look at the beach.”
On Tuesday Hewey described what he found when he arrived at the beach as sad: lots of dead herring — an ongoing and as yet unexplained problem — but also dead starfish, lobsters, bar clams, scallops and crabs.
ed Leighton is a retired veterinary pathologist who has been tracking the dead herring reports.
He hadn’t been to the beach to see the most recent findings, but he’s seen Hewey’s pictures and noted it’s a place dead herring have been found before.
“It’s a very striking and terrible scene,” he said in an interview on Tuesday.
Leighton said he’s most struck by the assortment of species Hewey and others found on Boxing Day. Other than most likely all being from the bottom of St. Mary’s Bay, Leighton can’t see any other obvious link.
While he has no idea what caused the kill, Leighton said the fact it cut across so many different species likely rules out some kind of infectious disease, because they tend to have a narrow range.
“A particular virus, for example, might affect several different species of fish but it’s unlikely to affect people and it’s unlikely to affect clams.”
His first question is whether it has anything to do with the death of the herring. Leighton doesn’t know, but he also noted herring have been dying for more than a month but this is the first time anyone has reported anything like this.
“It would seem to be at least a new phenomenon, but since we don’t know why the herring are dying, we can hardly say with any surety that, ‘Well, these other things can’t be dying of that.’ So I think we have to be open-minded about this.”
Leighton said it needs to be determined if this has happened anywhere else and it also needs to be confirmed that all of the animals on the beach in Plympton did, in fact, come from St. Mary’s Bay.
Researchers need to get to the bottom of the bay and see what’s happening, he said.
“In a die-off of water-dwelling creatures like that … one of the first things you want to do is go out to where it is happening and measure everything you can about the water, because that’s what they live in.”
It’s also the only way to know if the environment is changing, he said.
Leighton noted the most recent discovery and discussion are the result of “citizen scientists,” such as Hewey, and posts on social media. He hopes people keep patrolling the beaches and reporting any findings.
“That will really help us think through the kinds of things that might have caused it.”
Courtesy of cbc.ca
http://tinyurl.com/gv6uosx