WestJet flight being evacuated after cabin fills with smoke

Airline crewman is caught at JFK airport with $160,000 of cocaine

UFO Seen in Sky During Music Video Shoot in Japan

Bulgarians rush to save a phalanx of distressed, frozen storks 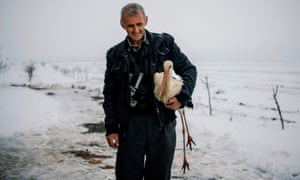 Safet Halil holds a stork in his farm backyard. He found five of the stranded birds, took them home and lit a stove to warm them up, before feeding them fish. Photograph: Dimitar Dilkoff/AFP/Getty Images
What would you do if you encountered scores of distressed storks covered in ice lying in a snow-covered field? In Bulgaria, people have been taking them home.
A cold snap in the north-east of the country has stranded hundreds of the migrating birds this week, covering their wings in ice and grounding them.
“I found five frozen storks near the village road the day before yesterday,” Safet Halil, 53, from the village of Zaritsa, near the town of Dulovo said on Wednesday. “I took them home, lit a stove to warm them and fed them fish.”
Halil, a road maintenance worker, sparked a wave of support on social media on Monday and others in the region followed his example, with more than 40 birds sheltered inside people’s homes, garages or barns.
Experts said the frozen wings had forced the birds to spend the night on the ground instead of perched on trees as usual.
“It’s the first time that we have seen so many storks in distress in Bulgaria,” said Hristina Klisurova, from the Green Balkans wildlife rehabilitation centre in Stara Zagora.
She appealed on public television for people to “avoid taking in just any stork” but only “those who are in a state of distress, injured or with frozen wings”, and to also release any saved birds back into the wild as soon as possible.
With the spell of high winds, sub-zero temperatures and snowstorms set to continue until the end of the week, Halil said he planned to keep his five companions in for several more days.
“It is minus 3C (27F) today and the weather is getting worse,” he said.
Apart from that, the birds had recovered and were doing well in their temporary home. “I already received two or three beak pinches on the arms,” he smiled.
Safet Halil stands next to the five storks he saved in the village of Zaritsa, Bulgaria. Photograph: Dimitar Dilkoff/AFP/Getty Images
In 2016, Bulgaria counted almost 6,000 inhabited stork nests, around 1,000 more than in the previous count a decade earlier.
In neighbouring Romania, meanwhile, more than 200 small birds, most of them song thrushes, were found frozen to death this week, said Ovidiu Bufnila, from the Romanian ornithological society.
She advised people not to try to catch storks, saying this would panic them and make them lose energy. She said only those that approached needed human help. 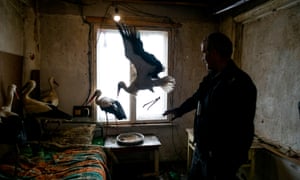