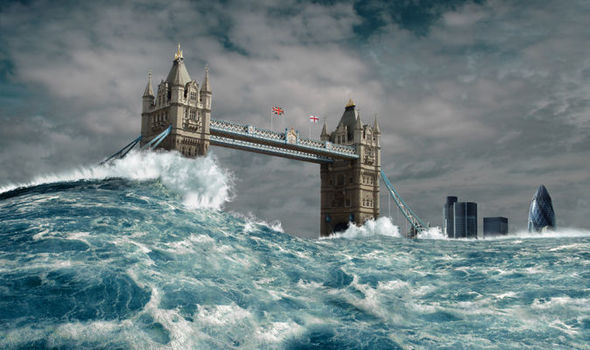 ‘It is FAR MORE serious than we thought’ Scientists warn tsunamis could hit Britain (Image: GETTY)
TSUNAMIS hit Britain much more regularly than previously thought, according to researchers who warn the risk of a mega-wave “is far more serious than we thought previously.”
Scientists have uncovered evidence which suggests the British Isles are struck by tsunamis with much more regularity than it had been believed.
Experts had previously believed in the past 10,000 years, there has just been one tsunami which has hit Britain – the Storegga landslide off the coast of Norway which led to a 20-metre high tsunami hitting the British Isles 8,200 years ago.
However, researchers from Dundee University have found two more killer waves which struck in the same timeframe.
A team from the university and workers from the British Geological Survey (BGS) have discovered sands in the Shetlands which they believe proves two more mega-waves hit.
Professor Dave Tappin of the BGS said: “They’re much higher frequency, and 1,500 years ago is very, very recent – it’s 500 AD if you want to think about it like that.
“It means that the hazard – the risk – is far more serious than we thought previously.”
Dr Sue Dawson, of Dundee University, said: “We found sands aged 5,000 and 1,500 years old at multiple locations in Shetland, up to 13m above sea level.
“These deposits have a similar sediment character as the Storegga event and can therefore be linked to tsunami inundation.”
“We are now using a CT scanning machine at the University of Dundee to look at our samples in detail.
“For the first time, we’ll have a complete 3D view of the cores we’ve extracted from the ground and from lochs and seabeds,” she explained.
“This detail will show us which direction the wave was travelling in, identify the elements present in the sand and much more.
“This will be the first time that such a level of detail has been captured from these prehistoric tsunami events.”
The team believes the tsunamis were triggered by two underwater landslides which dislodged the seabed, leading to massive waves.
Dr Tappin told the BBC these changes to the ocean floor can occur at any moment, meaning we should anticipate other tsunamis.
He said: “It is actually an event – and it’s not just maybe one in 10,000 [years],” he revealed.
“There could well be changes on the seabed, changes around the Greenland margin that may well increase the risk of future tsunamis to this part of the world.”
Courtesy of express.co.uk
https://tinyurl.com/ybvjht2u