All poultry exports from Sabah have automatically been stopped, following detection of bird flu in chickens in Tuaran on Aug 3.

Sabah Agriculture and Food Industries minister Junz Wong said this was to prevent the spread of the virus outside of the contaminated area.

However, he did not specify how many stocks or which countries are affected by the export halt.

“For Brunei, they themselves requested to stop the import of our poultry following this incident,” Wong said during a press conference on Monday (Aug 13).

A total of three chickens from two villages in Tuaran have been detected with the bird flu virus.

Meanwhile, villagers whose poultry have been culled following the detection of bird flu in Tuaran will be compensated.

Wong said villagers reared chicken mostly for their own consumption, and the culling has caused them losses.

“So, we will be compensating the affected villagers accordingly,” he said.

Meanwhile, he said poultry farmers would not be compensated as such because they knew the risks when venturing into the industry.

Almost 30,000 chicken and poultry have been destroyed after the detection of the virus.

Wong also said that the bird flu virus is believed to have originated from imported chickens, which were used in illegal cock-fighting activities.

On other matters, Sabah will have a standard operating procedure (SOP) to streamline the processing of bird’s nests for export to China.

“We want things done directly from Sabah and not have to go through Peninsular Malaysia,” he said, adding this move is expected to benefit locals.

Wong said those interested to venture into the bird’s nests business can go to his ministry to get their application forms.

Marine mammal experts are at a loss to explain why a large number of harbor seals have turned up dead on beaches in southern Maine this summer.

The most recent cluster of deaths was reported Monday when the carcasses of 11 harbor seals, mostly pups, were discovered on Bayview and Kinney Shores beaches in Saco. Those beaches are situated between Ocean Park and Ferry Beach State Park.

In the past two days, more than 30 dead harbor seals have washed ashore on southern Maine beaches, including Wells Beach and Ogunquit Beach, said Lynda Doughty, executive director of Marine Mammals of Maine, which investigated the Saco seal deaths.

Doughty said her Harpswell-based nonprofit has turned to the National Oceanic and Atmospheric Administration to help determine the cause of the seal deaths in Maine. NOAA is analyzing tissue samples taken from the dead animals.

Researchers are in the process of determining how many dead seals have washed ashore in southern Maine this summer, Doughty said Monday.

In Saco, the seal carcasses were in various stages of decomposition and their ages varied widely, although most of the animals were pups, Doughty said.

Thousands of dead #crabs washing up along coast of #Oregon, #USA 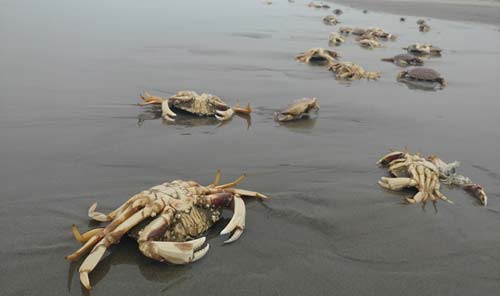 (Oregon Coast) – More strange finds on the Oregon coast this week: yet another rare squid and massive amount of crabs were found on the beaches lately. (Photos courtesy Tiffany Boothe, Seaside Aquarium).

More strange finds on the Oregon coast this week: yet another rare squid and massive amount of crabs were found on the beaches lately. (Photos courtesy Tiffany Boothe, Seaside Aquarium).

A whole lotta dead Dungeness crabs are washing up as of late, and it has some a little concerned.

Some of it is just the usual crab molting that happens right about now: beaches this time of year can be flooded with the empty shells of crabs that have shed their outer layer as part of their normal growth process.

But many of the crabs are simply dead carcasses, with their meaty bodies still inside the shells. It’s an unusually large amount of them: just about every beach on the Oregon coast is strewn with hundreds of them, sometimes thousands.

The culprit is a simple upwelling. This is when cold water gets churned up suddenly by a certain set of weather conditions and it brings up gobs of things from the bottom. This is definitely responsible for all the crabs washing up.

However, are there more dead crabs than usual? Is something causing them to die off in bigger numbers, or is it just that the ocean bottom got scoured a bit more than usual?

Cannon Beach’s Haystack Rock Awareness Program thinks it is an unusual amount of dead bodies mixed in with the molts, according to their Facebook posts. They believe it’s quite possible there’s a bigger die-off than usual.

There is evidence this is just a normal upwelling event and not a die-off, however. Seaside Aquarium education specialist Tiffany Boothe said she has found lots of other things as well.

“Along with the dead crabs we are also seeing a lot of tube worm casings, mole crab molts, and hatched out snail eggs,” she said.

Hundreds of dead sea urchins wash up on a beach in #Cornwall, #UK 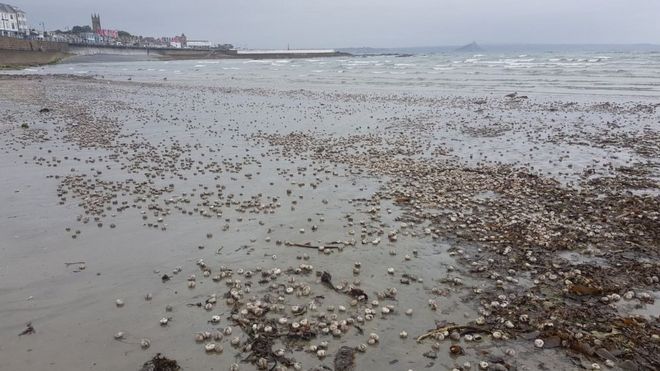 Hundreds of baseball-like sea creatures have washed up on a Cornish beach.

The small heart-shaped orbs were sea potatoes, a sea urchin that lives buried in sandy and muddy sea beds all around UK coasts.

Rosie Hendricks was on the beach at Wherrytown in Penzance earlier with her daughter, sister and nephew when she spotted the “odd-looking” creatures.

Ms Hendricks, from Penzance, who had never seen anything like it before, said: “I wasn’t sure what they were.”

200+ Penguins found dead on a beach in Sao Paulo, Brazil 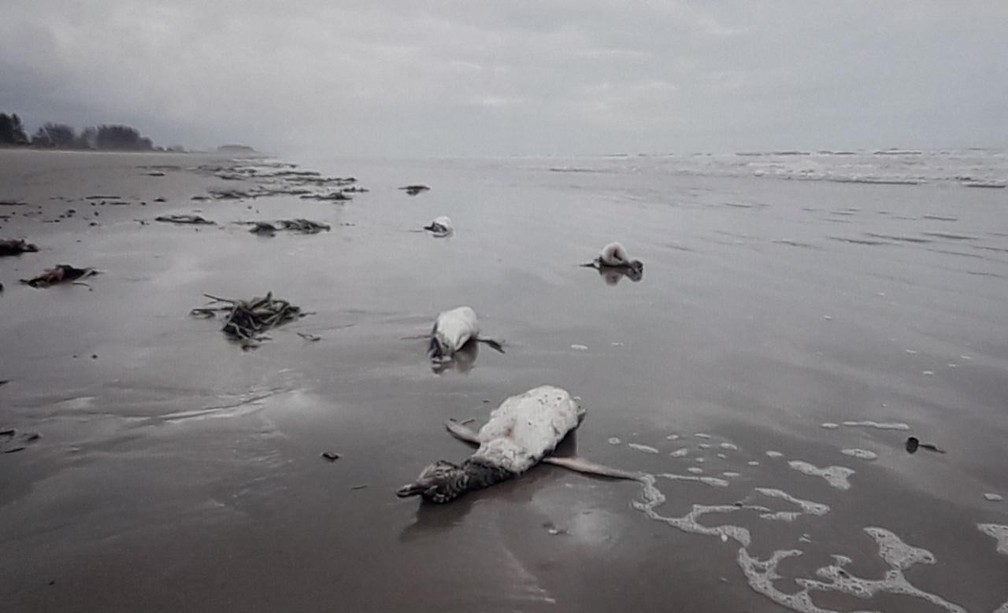 More than 200 penguins were found dead on the beaches of Long Island, Ilha do Cardoso and Iguape, on the coast of São Paulo, only in the first week of August. The number of animals collected surprised researchers at the Instituto de Pesquisas Cananéia (IPeC). According to them, most of the penguins found dead are young and not resisted the trip that begins at the southern end of Patagonia.

The Magellanic penguins (spheniscus magellanicus) inhabit the coastal areas of Argentina, Chile and the Falkland Islands, migrating sometimes up to Brazil, on the Atlantic Ocean, or Peru, in the case of the populations of the Pacific Ocean. According to the IPeC, the migration happens in colder period, when animals can find in the brazilian coast in warmer waters and food easier as shoals of fish also migrate because of low temperatures.

After severe storm’s moved through early Aug. 8, residents in the Surrey Hills neighborhood near NW 121 Place and Mustang discovered at least 100 dead birds underneath a tree.

FOX 25’s Jeff George speculates that the tree was struck by lightning, killing the flock of birds.

Hundreds of thousands of dead #fish wash up on beach, ‘a mystery’ in #Seaford, #UK

Visitors to Seaford described the sight as “odd” and “scary” and said they had never seen anything like it.

Sherrie Fox, 54, of Medina Place, Hove, went to the beach on Sunday with her boyfriend.

She said: “It was a very hot day. We got to Seaford Head at about 1.30pm and saw dead fish and jellyfish along the beach.

“As far as my eyes could see, it was a long line of dead silver fish. We saw some flopping around trying to get back into the water.

“So my boyfriend and I picked them up and put them back into the water.

“There were a few other people trying to save the fish. I was also surprised to see dead jellyfish.

“I’ve never seen anything like this before. It was a very scary sight.”

5,000 cattle dead due to cold and snow in Cochabamba, Bolivia

The Deputy Minister of Civil Defense, Carlos Bru, reported that at least 5,000 heads of camelid livestock died in La Paz, Oruro and Potosí due to snowfall last weekend. 25 municipalities of the country were affected by inclement weather.

In Cochabamba, the situation of the different municipalities is still being assessed, he added. However, the head of the Risk Management Unit of the Government, Óscar Soriano, said that the crops of some 20 municipalities were affected by snowfall.