Mass die off of #turtles by a ‘strange virus’ in St John’s river in #Florida, #USA

The Florida Fish and Wildlife Conservation Commission says an unknown virus may be to blame for hundreds of turtles dying in the St. Johns River.

According to a spokesperson for the commission, scientists at the University of Florida have identified a novel virus in 18 dead turtles discovered along the river. They say the virus seems to be a common link in the samples.

Since last March, FWC says more about 300 fresh-water softshell and cooter turtles have been reported dead or sick in the massive river. Experts say it doesn’t appear the toxic algae is contributing to the deaths, nor do any other types of animals seem to be affected.

4 dead #Humpback #whales wash up in past 8 weeks along the #Carolinas coast, #USA

Yet another humpback whale has been discovered washed up along the Carolinas coast, with a video posted on Facebook showing it tumbling in the surf at Corolla, North Carolina.

It’s the fourth humpback whale to wash ashore along the Carolinas in eight weeks, and the fifth dead whale overall. The fifth was a Blainsville Beaked whale that came ashore near Georgetown, South Carolina, in February, reported the Lowcountry Marine Mammal Network.

The latest whale corpse washed ashore Sunday at Whalehead Beach in Corolla, reported WDBJ. A 26-second video of it first appeared Sunday afternoon on the BeachPosts Facebook page and was shared by the International Dolphin & Whale Stranding Network.

The humpback was 27.5 foot female whale, and experts “performed a necropsy” on the corpse Monday, reported WTKR.

11.5 MILLION #clams wash up on a #beach in #WesternCape, #SouthAfrica 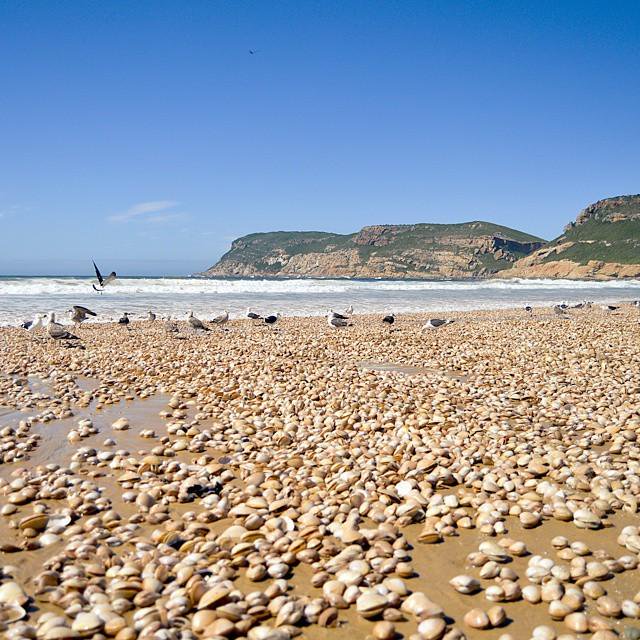 Ecologists think they know why 11.5 million clams washed up on Robberg Beach in Plettenberg Bay in the Western Cape last week.

The dedicated marine team of Nature’s Valley Trust, a non-profit organisation focusing on marine conservation and research in Plettenberg Bay and surrounding areas, said the washouts had become an annual event.

In a statement the marine team said: “The most plausible reason is that strong easterly swells and winds cause a large disturbance in the sand banks in which these clams usually reside.

“The turbulent water movement may prevent the clams from being able to burrow back and thus become subject to wave action and consequently wash out on to the beach.

“What we don’t know is why there are so many clams in the area, and why these strong winds are now causing them to wash out.”

The Marine Tourism Sustainability Project team and SANParks have quantified the clams (Mactra glabrata) through surveys which looked at the extent of the washout.

According to their calculations the recent washout extended to 5,875m² with the average number of clams in the deepest section (more than a metre deep) at 35,300m³.

The washout has left tons of protein on the beach and scavenger activity is expected.

123 TONS of #fish die in the #UralRiver in #Atyrau, #Kazakhstan

More than 123 tons of dead fish collected on the Ural River in the Atyrau region, said data on Monday, March 18, Saken Dildahmet , spokesman for the Committee for Forestry of the Ministry of Agriculture .

“In total, on March 18, the number of collected fish is 123.2 tons,” Dildahmet informed on Facebook.

The collected dead fish is delivered to Spetsavtobaza LLP and is utilized, its collection continues.

Dead fish began to float on the Ural River in December last year after warming. In spring, the true scale of a natural disaster was visible.

As previously reported, the damage from the massive death of fish on the Ural River in the Atyrau region exceeded a million dollars. This fact is under the control of the Minister of the Interior. Representatives of the ministry went to the region as part of an interdepartmental government commission.

It is also known that most of the dead fish are sturgeon artificially grown in specialized fish farms. Signs of especially dangerous diseases in dead fish were not found. At the same time, analyzes showed the presence of ammonia in both the dead and living fish of the fish of sabrefish, bream, crucian carp and white-eyed.

The adult menhaden, also known as bunker, were found Saturday in creeks and bays in Oceanport that are part of the Shrewsbury River estuary in Monmouth County.

Officials say the deaths occurred after a large school of menhaden were pursued by predatory fish and depleted the oxygen from the shallow water.

Officials took water samples and confirmed low dissolved oxygen in the creeks. Local crews were working to remove as many of the fish as possible, while the rest will decompose and eventually sink.

A fishing guide told APP.com that a lower than normal tide cause by stiff winds helped push water away from an already shallow area.

Menhaden are small schooling fish that play a vital role in the ocean food web. They are also harvested commercially for fish oil and used as aquaculture feed.

There have been multiple bunker fish kills in New Jersey due to various reasons in the last decade.

Bird flu has been detected in two poultry farms at Tarkeshwar Municipality in Kathmandu. The infectious disease, medically known as H5N1 influenza virus, was detected and confirmed in the chickens being reared in the farms belonging to Shyam Sundar Basnet of Basnet Tole in Tarkeshwor-7 and Shyam Kumar Basnet, chief of Department of Livestock Services Dr Jaya Prakash Raya said. According to him, as many as 28,000 chickens were being culled after they were tested positive for the infection. Dr Raya said the infection that causes severe respiratory diseases in birds was also seen in ducks and chickens last year and that they were destroyed to prevent further infection. The disinfectant was being sprayed in the empty poultry farms to kill the virus.

There’s something fishy going on in a key waterway north of Brisbane after reports of “thousands” of dead fish.

14 dead #sharks wash up, ‘a mystery’ in #Gansbaai, #SouthAfrica

The bodies of 14 bronze whaler sharks were discovered near Gansbaai earlier this month.

The sharks are listed as near threatened on the International Union for Conservation of Nature list, because they are being targeted in commercial and recreational fishing for their meat.

The carcasses of 13 bronze whaler sharks were discovered washed up on a beach near Gansbaai on March 5.

Natalia Drobniewska, the operations manager at the SA Shark Conservancy, said one of the sharks was pregnant.

Sharks washing up on the beach is not a common phenomenon.

Georgina Pendell, a marine biologist for the White Sharks Project, said in the year she worked for the organisation, she didn’t hear of any similar cases.

It is still unclear what led to the sharks being washed up.

“There are a lot of possible reasons for the sharks to wash up: being hit by a boat, getting stuck in fishing nets and then dying, getting caught on long lines and then discarded back in the ocean, natural causes and sickness,” Drobniewska said.

Pendell said there was a trawler near to where the sharks were found.

“They might have gotten tangled in the nets, died and then got washed on to the beach,” Pendell said.

Massive #fish kill in the waters of #Oceanport, #NewJersey, #USA

Oceanport residents say a massive amount of dead fish washed up in their waterways within a 24-hour time span.

Heaps of the stinky, dead fish formed a carpet of carcasses among docks and boats off the Shrewsbury River.

Oceanport Creek, Parker’s Creek and Blackberry Bay ended up being the final resting place for the dead fish.

New Jersey, as well as others states like Florida, has seen its fair share of fish kills through the years, which typically takes about a few weeks. What make this massive fish die-off a-typical is that it happened within a 24-hour period.

“Normally, we do have this happening on a yearly basis, but not to the extent we had this year,” says Mario Criscione, owner of Marina at Oceanport. “So Friday, there was nothing, and Saturday you had this whole event.”

The Department of Environmental Protection released a statement saying, “The dead fish are adult Manhaden fish and group in large schools. They are ocean going, but do go into smaller waterways to escape predators. When this happens, they tend to use up all the oxygen and die. The DEP took dissolved oxygen samples.”

Hundreds of #dead #fish found in a lake in #Aracaju, #Brazil

Dead fish were found in the Augusto Franco Park, in the South Zone of Aracaju.

The reason for the death of the animals is unknown, but this is not the first time this happens in the park. In January of this year , hundreds of fish were found dead on the spot.

In a statement, the Municipal Service of Urban Services (Emsurb) said that the report of the Technological and Research Institute of the State of Sergipe (ITPS), requested in February, reported that there is no contamination in the lake water of the Parque Augusto Franco. The technical investigation of the institute still confirmed the exacerbated growth of the population of fish, level far below the water, caused by the lack of rains in the period, high salinity, due to the presence of the sea water that, necessarily and in a controlled way, arrives at the lake by means of the floodgates, would be causing the death.

Since the causes of death were officially confirmed, Emsurb has programmed the expense in the waters of the lake. In this interval, there was a 50 mm accumulation of rainfall in the capital, according to the National Institute of Meteorology (INMET), which could lead to a reduction in salinization content and an increase in lake water level.

The company also said that after the new occurrence on Sunday will carry out the spending in the next few days to prevent overpopulation of fish cause further deaths.