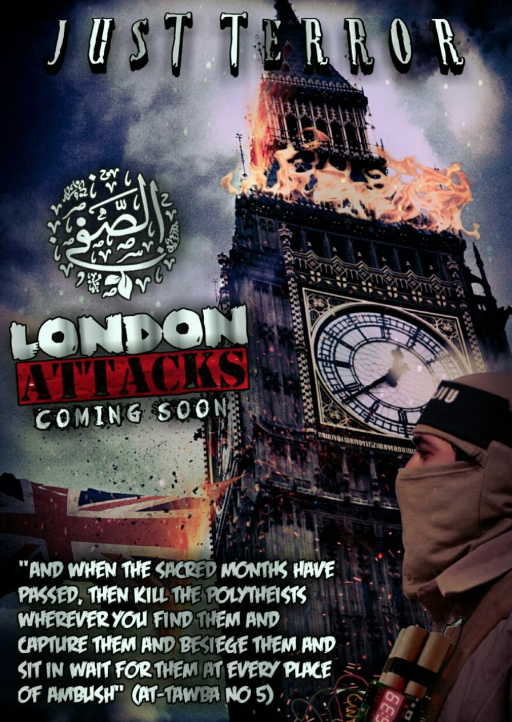 ISIS fanatics have released new propaganda inciting attacks in Britain on the second anniversary of the bombing on Manchester Arena.

Jihadi nuts have been circulating the new poster depicting a suicide bomber standing in front of a burning Big Ben.

It is captioned with the warnings “London attacks coming soon” and “just terror”, also showing a burning Union Jack.

ISIS fanatics have issued the new threat on the second anniversary of the atrocity committed by terrorist monster Salman Abedi.

He killed 22 concertgoers who had just seen pop star Ariana Grande when he detonated a homemade bomb.

The threat to London also includes a quote from the Koran’s At-Tawbah 5 – or the “Sword Verse”.

It reads: “And when the sacred months have passed, then kill the polytheists wherever you find them and capture them and beseige them and sit in wait for them at every place of ambush.”

The verse carefully excludes teachings urging them to “protect” unbelievers and “grant protection till he hears the words of God” as ISIS pervert the teachings of Islam.

It cites them as being created by the Ash-Shaff Media Foundation – a propaganda wing of ISIS.

Home secretary Sajid Javid confirmed this week that 19 major terrorist attacks have been foiled in Britian.

He said 14 were islamist and the other five were from “right-wing ideologists”.

Javid warned “we are all potential victms” with terrorist attacks happening all over the world.

He added: “Despite this impressive work, the tempo of terrorist activity is increasing.”