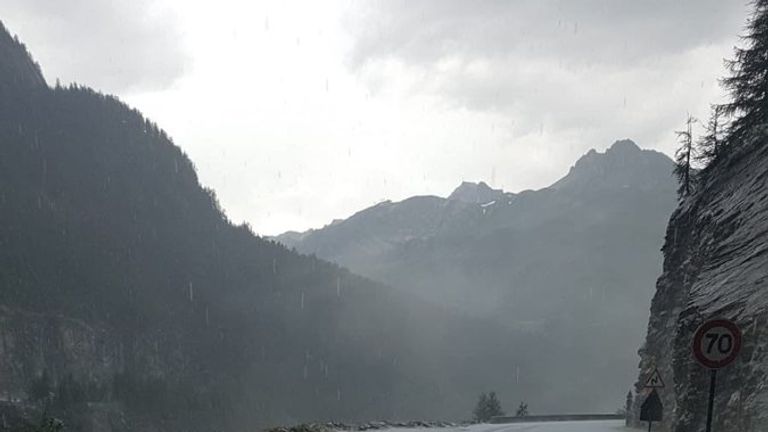 The decision to abandon a stage is rarely made. Pic: Tour de France

The organisers of the Tour de France have stopped Friday’s stage because of a hail storm.

They said the course had become too dangerous for the riders and that times would be taken from a previous part of the stage.

Pictures also show snow on the ground on the stage between Saint-Jean-de-Maurienne and Tignes in the French Alps.

The stoppage was announced as the racers were hurtling down a series of hairpin bends, throwing the race into chaos.

TV footage showed an excavator trying to clear a landslide as it became clear it would have been impassable for the riders.

Team Ineos sports director Nicolas Portal was disappointed, saying: “We had the race in our hands… but the riders’ safety comes first, ASO (organisers) did a great job.

“We wanted to smash it today and the guys were super motivated. It would have been ideal if the race could have continued.”

France experienced one of its hottest days ever on Thursday.

The decision to abandon a stage is rarely made, and it led to Frenchman Julian Alaphilippe losing the yellow jersey to Colombian rider Egan Bernal, heading into the last two days of the race.

British rider Geraint Thomas is in sixth, a year after he won the competition.

The positions heading in the the final weekend are important as it is traditionally seen as a procession.

Cyclists will jostle for position during a time trial race on Saturday, before making their way to Paris, where they will race several laps of the city and crown the winner on Sunday.