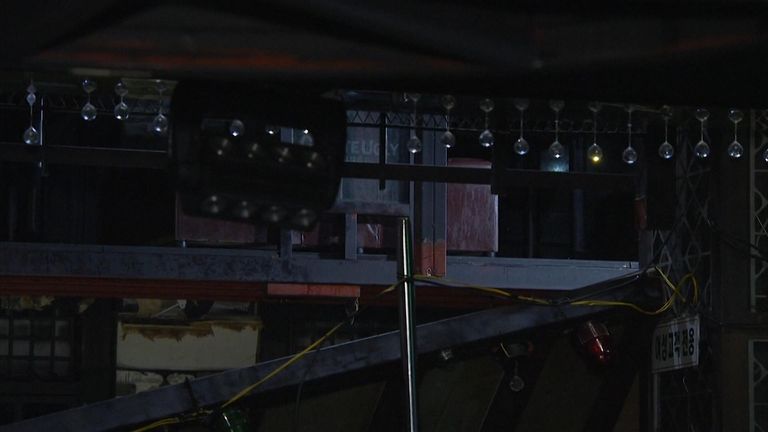 Hundreds of people were inside the venue at the time, according to reports

Two people have died and 16 others injured after the upper floor of a South Korean nightclub collapsed.

There were about 300 people in the venue when the floor gave way around 2am local time (6pm UK time) in the city of Gwangju.

Most of them were athletes competing at the World Aquatics Championships.

A fire department official said people had been pinned underneath the floor but it was not clear exactly how many had been injured.

New Zealand men’s water polo team captain Matt Small said: “We were just dancing and then the next minute we dropped five to six metres and everyone started rushing out of the club after that.”

He told New Zealand’s Radio Sport: “We… fell on top of the heads of other people that were beneath us.”

There was some confusion about the nationalities of those injured.

Members of the Australian women’s water polo team were also in the club, celebrating their championship bronze, but were not injured.

Three people were treated in hospital and the others went to the athletes’ village medical centre and were treated for minor injuries.

A police officer told Reuters that the club’s two owners and two workers were being questioned about possible illegal expansion and renovation.

The water sports competition was organised by FINA and is to finish on Sunday.

FINA said in a statement that it “deeply regrets the situation and sends its best wishes to any victims of this accident”.

“As some Championships’ participants were present at the moment of the accident, FINA is carefully monitoring the situation and will activate all measures to ensure health care and assistance is provided whenever necessary.”