Large die off of #salmon in #NortonSound region, #Alaksa, #USA

The corporation’s fisheries director, Wes Jones, says the numbers of dead humpies being reported are larger than what’s normally seen in the Norton Sound region, spread out across several communities from east to west.

One of those reports came from Sophia Katchatag, the community coordinator for the Native Village of Shaktoolik. On Tuesday evening, Katchatag took her family up the Shaktoolik River, to a place called Jink-wok, to swim and cool off from the hot weather. She found a creek with “one area completely filled with dead pinks floating on top of the river.”

Katchatag didn’t pick any of them up, and she doesn’t intend to eat them, either.

Thousands of dead #fish appear on a beach in #Escuintla, #Guatemala

Staff of the National Coordinator for Disaster Reduction (Conred) came to verify the death of thousands of fish of various species, which appeared this Saturday on the shore of Tecojate Beach and the Zanjón Salado River in Nueva Concepción, Escuintla.

According to local media, the neighbors blame the death of these animals on several shrimp companies that operate in the sector and expel their waste to the rivers, as well as the drains that flow into the beach, producing high levels of pollution.

Hundreds of dead #fish wash up in a river in #Frontera, #Mexico

From the first hours of this Saturday, inhabitants of the community of San Pedro, made a call to the authorities after they noticed the presence of dead fish on the banks of the San Pedro and San Pablo River that gave off bad smells.

Locals said they fear for some epidemic, for the presence of foul smells and the remains of fish known as “casabe”.

Inhabitants point out that they would prove to be the cause of these actions, since this fish is not acquired in the market, so that by being enmeshed in the nets, the fishermen, dispose of the dead fish, which reach the shore with the tide .

In this holiday season, hundreds of people arrive at the beaches and run into thorns and bad smells, so locals call on the corresponding authorities.

According to the regional inspectorates for environment and water resources (RIEW) in Burgas and Varna, dead dolphins are becoming less and less. Since the beginning of 2019, the total number of dead dolphins has been 38.

Three types of dolphins live in the Black Sea – the usual dolphin, mutkur and bottlenose dolphin. They are protected species in accordance with Bulgarian law prohibiting them from harassing, stalking, capturing and killing.

In recent years, the number of dolphins thrown during the summer months has increased significantly (with a peak in July 2016 and August 2015). This phenomenon – the so-called phenomenon of “unusual death event” is observed at the same time along the Turkish coast of the Black Sea and the Italian coast of the Ionian Sea.

In accordance with the Law on Biodiversity, after receiving a signal about a dead dolphin, RIEW experts conduct on-site inspections. On examination, obvious reasons for the death of a mammal and biometric data are accepted. When the probability of human intervention is established as the cause of death of a sample, the prosecutor’s office and the Ministry of Internal Affairs should be notified.

In other cases, the RIEW shall notify the relevant Black Sea municipality in whose territory the dead dolphin is located, of the adoption of measures in accordance with the issued permit.

SEVEN GRAY WHALES WERE found dead in Alaska over the weekend in the latest development in what the National Oceanic and Atmospheric Administration declared an “unusual mortality event.”

NOAA says gray whales have been dying at an unusually high rate in an area stretching from Alaska to Mexico. The agency’s latest numbers say 171 gray whales have died this year in Canada, the U.S. and Mexico. That tally does not include the seven whales recently found in Alaska.

NOAA in May declared the deaths an unusual mortality event, defined as a “stranding event that is unexpected, involved a significant die-off of any marine mammal population, and demands an immediate response.”

The agency is investigating the deaths, and examinations conducted on some of the dead whales suggest that they died of starvation, though NOAA said the findings were not consistent across all the mammals examined.

Gray whales migrate in the summer from warm waters near Mexico to the Arctic, where they feed.

Julie Speegle, an NOAA spokeswoman, told CNN scientists think the whales’ food source may have been disrupted because of a lack of Arctic sea ice last summer.

Gray whales were on the endangered species list until 1994 but now number about 27,000 in the North Pacific. The species previously experienced an unusual mortality event in 1999 and 2000.

Hundreds of dead #fish wash up in a river in #Ontario, #Canada

An investigation has been launched after hundreds of dead fish were discovered in an eastern Ontario river.

The fish have been found in recent days in the Ottawa River in Clarence-Rockland, Ont. Various species have been affected, including muskies, carp and catfish. Dead eels have also turned up.

“If you look out on the river, every white spot is a dead fish at this point,” Eric Champagne, who often fishes in the river, told CTV News Ottawa.

“You could probably lose count, because there’s so many.”

Officials from the Ontario, Quebec and federal governments have all collected samples of the fish and water.

At this point, it’s believed that the fish died in the Du Lievre River in western Quebec and then flowed downstream into the Ottawa River. Lack of oxygen is believed to be a key factor in the deaths.

Nadeau speculated that the lack of oxygen could have been caused by some sort of spill or leak into the river. Test results that could shed light on the mystery are expected to be available within days.

A spokesperson for Quebec’s environment ministry told CTV News Ottawa that it was not aware of any spills in the river within its jurisdiction.

Clarence-Rockland announced Wednesday that testing had not showed any adverse effects on the local drinking water supply, although the water’s temperature has changed.

Ottawa Riverkeeper is recommending that people not eat fish from the river until more information about the deaths is known.

4 dead #turtles found on a beach in #MarinaRomea, #Italy 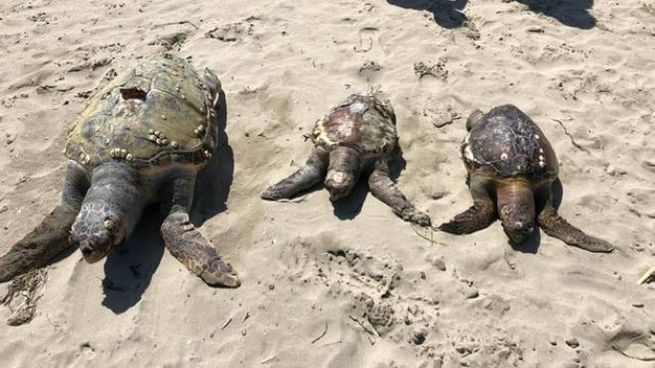 Ravenna, 10 July 2019 – Four dead sea turtles on the beach of Marina Romea . Caretta Caretta’s carcasses were on the shoreline of the Marisa bathroom. It was Mattia Ravaglia, the owner of the plant, who noticed the specimens around 2 pm and called the Forest Service, which in turn informed the Civil Defense.

The turtles were then recovered for analysis.

4 more dead #dolphins, 313 dead this year along the coast of #Crimea In recent days, 5 dolphins jumped to the shores of Crimea, one was saved.

According to the center, since the beginning of the year, 313 emissions of dolphins and porpoises (azovka) have been recorded on the coast of the Crimean peninsula. The leader, as usual, is the Sevastopol district (43.8%), in second place is the Saki region (18.5%). Azovs suffer the most, followed by bottlenose dolphins, emissions of white barrels are recorded less frequently, write “Crimea News”.

According to experts, the statistics for the current year are similar to last year: as of July 20, 2018, 324 dead marine mammals were discovered.