Thousands of dead #fish wash up in a #reservoir in #Utah, #USA

Thousands of dead fish have washed ashore at a reservoir in northern Utah this summer.

The Standard-Examiner reports biologists with Utah Division of Wildlife Resources have noticed a massive die-off of fish at Pineview Reservoir in Weber County.

Many of the fish were young black crappies. Black crappies are freshwater fish that like to live in flooded vegetation.

He said dropping water levels have forced the fish into shallow water along the shoreline where they become “stressed and crowded.”

There was a similar die-off of fish at Pineview last year that had affected hundreds of fish.

Penne said the fish will likely continue to die if temperatures stay hot in Utah.

10,000+ #chickens killed due to #BirdFlu in #BaRiaVungTau, #Vietnam

The outbreaks were spotted in two communes in Xuyen Moc district on July 31 and Aug. 1, and then tests confirmed that some chickens were infected with the bird flu virus, Vietnam News Agency quoted the provincial Department of Livestock and Animal Health as reporting.

Relevant local agencies have culled 10,500 chickens raised by two households in the two communes, disinfected surrounding areas and intensified vaccination among fowls in the district.

In late July, the Vietnamese Ministry of Agriculture and Rural Development said that the outbreaks of A/H5N6 and A/H5N1 bird flu had been reported in 13 communes of 11 localities from the start of 2019, leading to the culling of more than 23,000 poultry.

The bird flu is forecast to widely spread in the remaining months of this year due to changing weather and surging poultry transportation in time ahead of the lunar new year holiday.

Vietnam first detected bird flu virus strain of A/H5N1 in December 2003 on both humans and fowls. More than 45 million poultry in Vietnam were culled between 2003 and 2006. Since then, hundreds of thousands of fowls have been killed each year.

In the 2004-2014 period, 127 people in Vietnam were infected with H5N1, including 64 fatalities, according to the ministry. The country has detected no new human cases of H5N1 infection since 2014.

About 10,000 fish have been killed by an agricultural pollutant, the Environment Agency have said.

An investigation revealed roach and trout died in the River Mole, South Molton.

The Environment Agency said the source of the chemical-based pollutant which impacted 5km (3.1 mile) of a river had been identified and it would now be working out how it got into the river.

The results of the investigation should be released later this week.

There is no longer a danger of the pollution killing any more wildlife in the river because the officers on site got as much pollution out of the river as possible, the Environment Agency said.

It is continuing to restore oxygen levels to the river to protect wildlife.

Some thousands of kilos of dead fish have been found in the lake since last Wednesday, but the exact amount is not yet known by the authorities.

Samples of fish and lake water have been taken and submitted for examination to the North Savo Living Center. The police will also investigate whether there is any reason to suspect a crime.

On Monday morning , Anu Sepponen, the mayor of Rautalampi, visited the lake with a fish expert from the ely center. The purpose is to map how many dead fish still float in the lake and its shores.

Really big fish have been spotted. We just looked at the pictures that there have been more than eight pounds of dead pike, Sepponen says.

According to Sepponen, the number of fish is difficult to evaluate visually, because they easily sink in windy weather.

The Environment Agency has admitted it is too busy to dispose of more than 1,000 dead fish that are rotting in an East Anglian river.

Residents have flagged up the problem and warned people to keep their dogs and children away from the River Hundred by Kessingland Sluice, near Lowestoft.

The fish were first spotted on Sunday, July 28, by Sue Faith, 59, a carer from Kessingland who walks dogs in the area and was concerned about a potential health hazard.

Mrs Faith said: “It’s smelling and it’s horrible. I want to warn people against going there. Keep the dogs and children away.

“The day before we had the dogs in there swimming and the next day the fish were floating on the water. I was very worried and scared.

“The Environment Agency said their policy is the dead fish will sink to the bottom and that’s the end of it.”

20 whales dead after another ‘mysterious’ stranding in Iceland 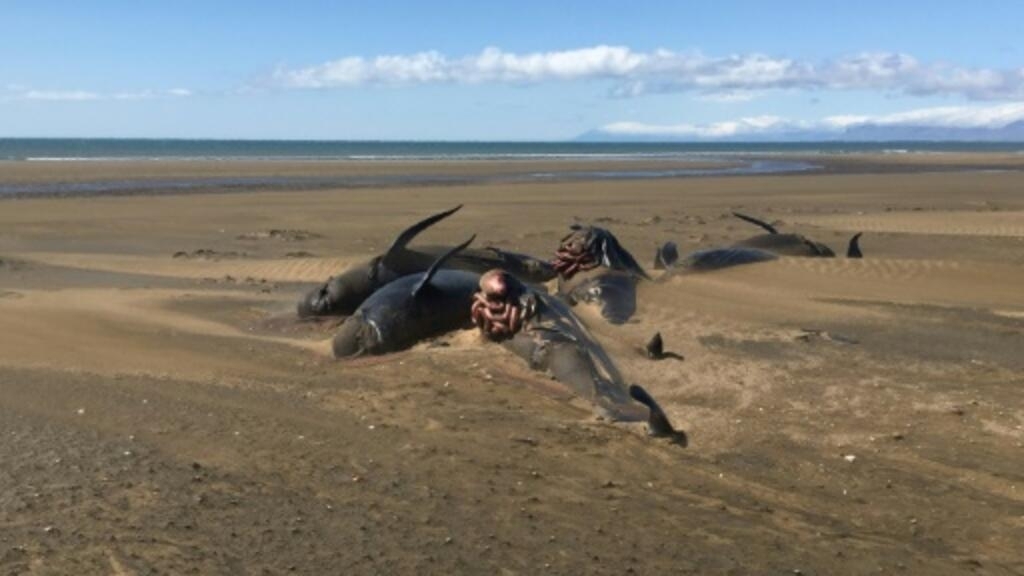 Some 20 pilot whales have died stranded in mysterious circumstances on the south-western coast of Iceland, emergency services said Saturday, only two weeks after a similarly unexplained mass stranding had already killed dozens of the long-finned cetaceans.

The dead whales, part of a group of 50 stranded whales, were discovered late Friday near Gardur, some 50 kilometres (31 miles) from the capital Reykjavik.

According to Icelandic media, locals began rescue efforts to save the whales even before emergency teams arrived.

“Around 90 volunteers worked all night to keep the animals wet,” David Mar Bjarnason, a spokesman for the Icelandic research and rescue association, told AFP.

By 08H00 GMT the last of the surviving whales were back in deep water.

“We had to wait for high tide to get them back into the sea,” Bjarnason said.

Pilot whales are relatively plentiful, with their stock in the Atlantic estimated at between 500,000 and 800,000 animals.

Last month 52 dead stranded whales were spotted on a remote beach in the west of the north Atlantic island nation.

Pilot whales, which belong to the dolphin family and feed primarily on squid, can sometimes get stuck if they follow their prey into shallow coastal waters.

But scientists are mystified as to why such large numbers should get stranded at the same time.

Some theories mention magnetic field interference, while others say that a pod of pilot whales will always follow a single leader — even if that dominant whale leads them into mortal danger.

32 #dolphins found dead this year along the coast of #Tuscany, #Italy 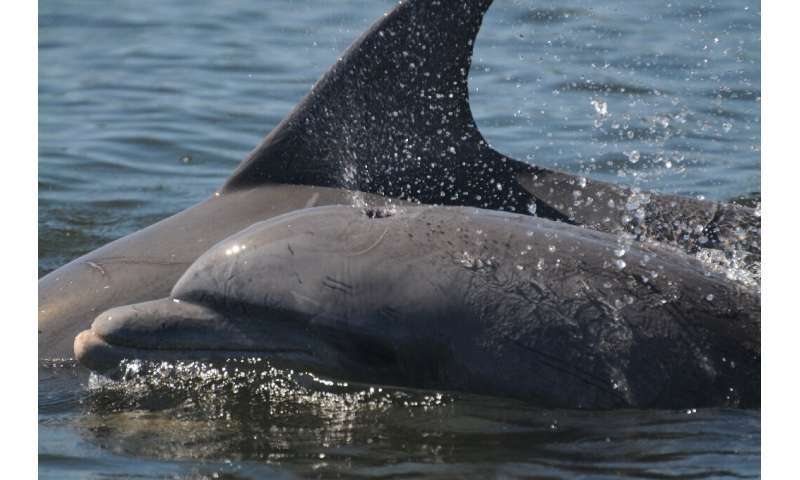 Thirty-two dolphins and two whales have been found dead off the Tuscan coast since the beginning of the year, the Italian region’s environmental protection agency said Friday.

Autopsies showed many had stopped feeding, suggesting they had been hit by a virus, possibly measles, experts said.

Over just four days at the end of July the bodies of six dolphins were found, the agency’s spokesman Marco Talluri told AFP.

“We analysed the stomachs of eight specimens and found that they were half empty, as if the animals had not eaten for two or three days,” said Italian biologist Cecilia Mancusi, an expert from the ARPAT environmental agency.

The dead cetaceans included bottlenose and stenella dolphins and a sperm whale.

“This could indicate that the dolphins had not been doing well for some time, and that it could be a virus like measles, which caused hundreds of dolphin deaths throughout Italy in 2013,” she was quoted as saying by the Corriere della Sera daily.

Results of tests performed on the carcases were not expected before the end of August.

Gianna Fabi, a researcher at the Institute for Biological Resources and Marine Biotechnology, who studied a similar phenomenon in June with 14 dolphins dying in the Adriatic over three weeks, said the cause was unlikely to be plastics or pollution.

Massive die off of #Krill and #mussels in #Alaska, #USA 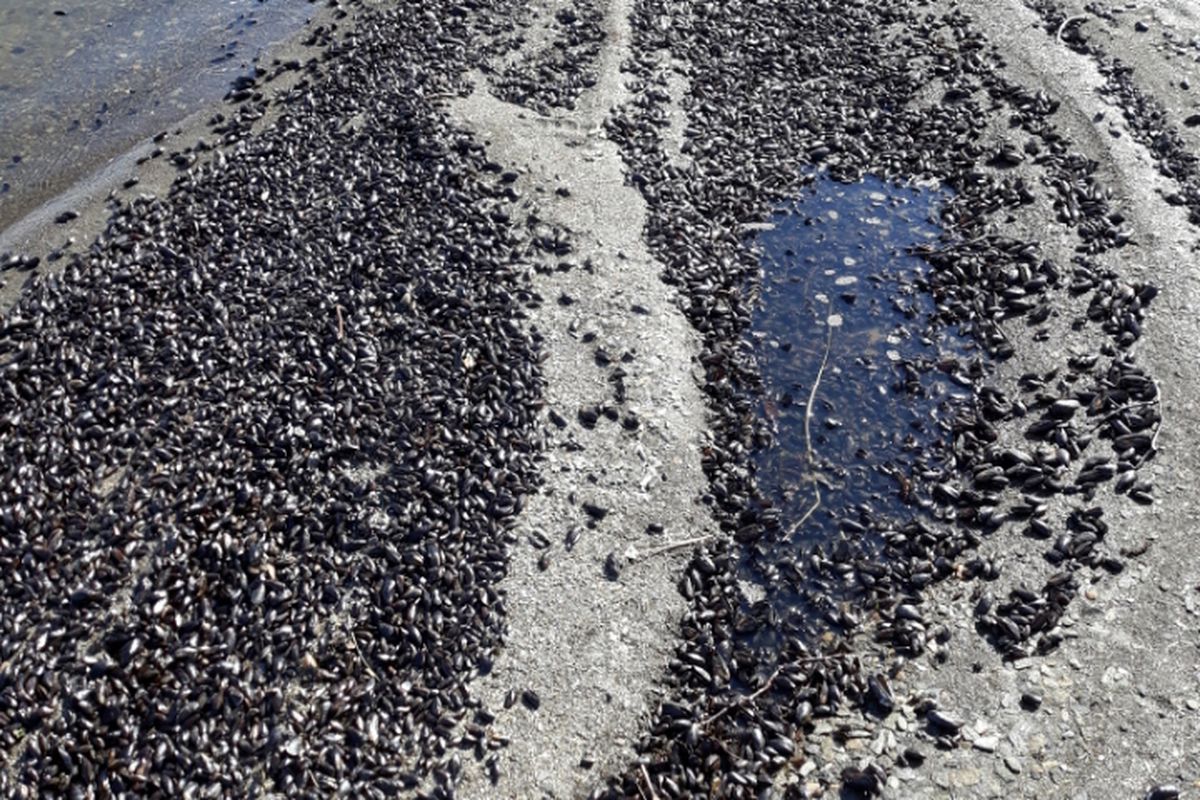 Residents from two Northwest Alaska villages say they found large numbers of dead mussels and krill washed up along shores in June, contributing to fears in the region that record warm waters may be causing a wide range of ecosystem changes, including unusual wildlife deaths.

The discoveries come amid profound changes in the ocean environment in Alaska linked to climate change, including a dramatic early ice melt, warmer water temperatures and record high air temperatures. There has been a string of unusual mortality events this season including deaths of seabirds and seals. Scientists are working to pinpoint what killed the animals and whether the deaths are related.

Mike Brubaker, director of the Center for Climate and Health at the Alaska Native Tribal Health Consortium, oversees a network of local environmental observers in Alaska and elsewhere. He wrote in late June that “an ecosystem scale event appears to be playing out” off Alaska’s coasts, related to unusual ocean conditions.

“We do not know if these events are connected or what the cause or causes are. There are a number of possibilities,” wrote Brubaker, an environmental health professional.

The northern Bering Sea in May and June has never been warmer than this year, according to Rick Thoman, a climatologist with the University of Alaska Fairbanks. Following years of low sea ice, those and other waters near the Seward Peninsula late last month were 6 to 12 degrees above normal.

2500 head of cattle have died in Putaendo because of the worst water crisis in decades, according to local farmers and ranchers, who ask agriculture minister Antonio Walker to declare an agricultural emergency .

More than a hundred muleteers and breeders from the Putaendo area met with the mayor of the commune, councilors and the deputy of the Frente Amplio for the 6th district, Diego Ibáñez, to demonstrate the problems that the drought is afflicting them, especially with the Death of their animals

According to estimates, 30% of minor and major cattle have been lost. Victor Ramírez, farmer and rancher, said that as a result of this crisis he has no fodder or water.

“Central News Agency” reported that the high temperature, the fish in the Shuguang Lake in Jincheng County, Jinmen County, Taiwan can not stand, nearly 20,000 “hot death.” The fish corpse is almost full of lakes, especially in the corners, which is shocking. The stench of the fish corpse also allowed the passing people to quickly pass by.

On the afternoon of the 29th, the Shuguang Lake near Shuguanglou suddenly appeared a large number of dead fish, stinking. Wu Zhiwei, director of the Jinmen County Conservation Engineering, was informed of the event. He analyzed that due to the hot weather and the lack of dissolved oxygen in the water, the fish cluster was violent. Initially estimated that the dead fish is only 20,000 feet up and down, many people have been cleared to clean the lake, and the dead fish that have been salvaged will be sent to the garbage disposal site for burial.

Li Jinchao, a technician at the Fisheries Laboratory near Shuguang Lake, came to the attention. After observation, he said that dead fish include sea bream, squid, mullet, black scorpion and bitterness. He analyzed that the fish population entered the Twilight Lake when the sea water rose and retreated. It may be too hot in recent days. The Shuguang Lake lacks air pumping equipment, the water cannot be exchanged up and down, and the lake is under oxygen, causing the fish to be violent.

Twilight Lake also suffered fish deaths two years ago. Li Jinchao said that if the weather suddenly becomes very hot, this will happen in Taiwan’s rivers and seashores; because the aquaculture equipment has air-entraining equipment, the water flow is continuously exchanged, and it will not cause hypoxia. This is only the case in natural waters.

The Jinmen County Environmental Protection Bureau staff also attended the sampling and testing of water quality. The result was a water temperature of 35.5 degrees Celsius and a pH of 9.5. The initial judgment may be that the water temperature is too high and the fish died.

Cao Jiahong, director of the Golden Gate weather station, said that from 23 to 29, the high temperature in Kinmen is between 32 and 34 degrees Celsius. Although the temperature is not the highest, the air is obviously clean and the amount of cloud is small. Spicy, I feel the weather is hot.