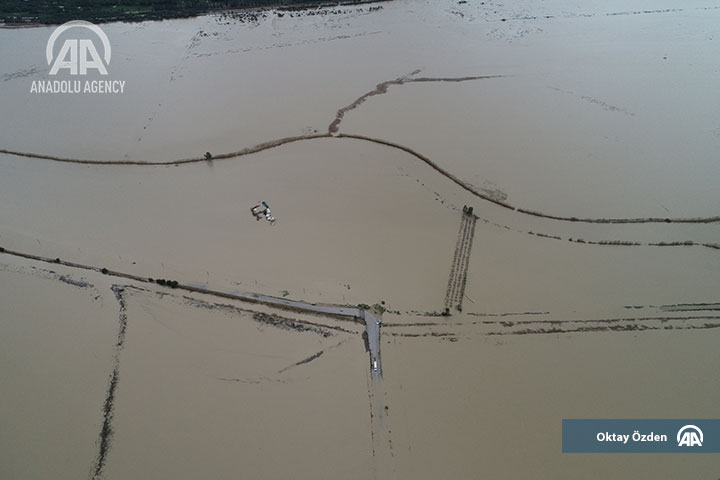 Severe weather including strong winds, rain and snow has affected wide areas of Turkey over the last few days.

At least 2 people have lost their lives after heavy rain triggered landslides and flooding in the southern province of Mersin. Governor of the province, Ali İhsan Su, said in a statement that approximately 165mm of rain fell in 24 hours in Mersin. Heavy snow was also reported in higher elevations in the province.

Floodwaters inundated the districts of Mezitli, Yenişehir, Toroslar and Akdeniz. One person died in a vehicle trapped in flood waters in Mut district. Another victim died in the province after a landslide buried a house in Erdemli district.

At least 2 people died after severe floods hit Mersin in late December 2016, when over 140mm of rain fell in just 10 hours.

Heavy rain also triggered flooding in the neighbouring province of Antalya Province, where some homes were evacuated in Serik and Gazipaşa.

The bad weather conditions also caused air travel delays after a plane skidded off the runway at Sabiha Gökçen Airport. All passengers were safely evacuated and there were no injuries reported.

A downpour lasting 12 hours caused deadly flash flooding in the province of Luanda, Angola, on 04 January, 2020.

News agency ANGOP reported that 250 families have been displaced after houses were flooded. The worst hit areas include the municipalities of Talatona (116 houses flooded), Viana (80) and Cazenga (12). One person died in flood waters in Zango commune, Viana Municipality. Flooding was also reported in Cacuaco Municipality where a bridge was in danger of collapse.

Elsewhere in the country at least 200 houses were damaged by floods in the city of Sumbe in Cuanza Sul Province. Heavy rain from 03 to 05 January damaged or destroyed around 15 houses in areas on the outskirts of Menongue, capital of Cuando Cubango province. One person was also injured.

President of Angola, João Lourenço, said that authorities will make all efforts to help the victims of the floods.

#Floods and #Landslides Hit Over 300 Families in #Huanuco, #Peru (Updated)

Around 25 homes have been damaged and 25 families affected after a landslide and flooding in San Pablo de Pillao district, province of Huánuco, on 08 January, 2020. On the same day, flooding from the Pachitea River damaged around 30 homes and affected over 50 families in the district of Tournavista, Puerto Inca Province. The overflowing Pachitea river had previously flooded parts of Yuyapichis District. 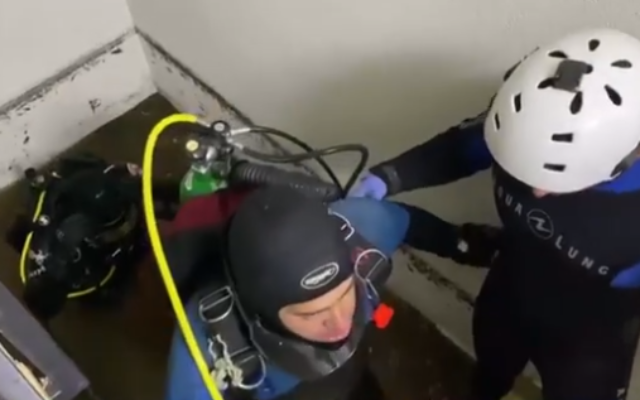 A man and a woman were killed in the basement level of a residential building in the south of Tel Aviv on Saturday, after becoming trapped in a flooded elevator during heavy storms. The two apparently drowned.

The 35-year-old man was rushed to hospital in critical condition after being extracted from the elevator by firefighters. Paramedics from the Magen David Adom ambulance service attempted to resuscitate him as he was taken to Sheba Medical Center in nearby Tel Hashomer. However, he later died.

The 30-year-old woman was brought out some time after the man in critical condition and medics made efforts to save her but were unsuccessful.

Officials said the elevator became stuck, possibly due to a power outage, and flooded with water.

Residents told Hebrew media they heard banging from the elevator and called police but that rescue services took between 30-60 minutes to arrive.

Alfred Jadid, the owner of the building, also accused the police and fire services of taking too long to respond.

“When I arrived the water had already reached the top,” he was quoted saying by the Ynet news site. “We tried to open the doors but were unable to.”

“They weren’t prepared for this,” he said of the rescue workers.

He also said residents of the building called police “maybe 100 times,” something denied by a police source, who told the news site only one call to the emergency hotline was recorded.

A diver from the fire services said the rescue mission was a particularly complicated one.

“The water was murky and dirty. We didn’t see anything,” he told Channel 12 news.

In a statement Saturday night Prime Minister Benjamin Netanyahu said he was “appalled by the tragic death of two Tel Aviv residents killed in the elevator disaster.

“I have spoken with the public security minister, the transportation minister the acting police chief and head of fire and rescue services to look into how this happened and how such disasters can be prevented in the future.”

In northern Israel, a man in his 70s died in the Haifa suburb of Kiryat Bialik after he was electrocuted by a heater in his home.

Parts of central Israel saw record rainfall, with massive downpours flooding streets and swelling rivers. According to Ynet, 71 millimeters (almost 3 inches) of rain fell in Tel Aviv over the course of a two-hour period.

Videos posted to social media saw streets in Tel Aviv and Jaffa flooded, with water reaching near the roofs of cars.

A 55-year-old woman was discovered in a pool of water on the city’s Hakhme Yisrael Boulevard. She was treated by paramedics and taken to hospital suffering from hypothermia but in stable condition.

Thousands have been displaced after massive flooding in Jakarta, Indonesia, 01 January 2020. Photo; BNPB

Disaster authorities report that, as of 04 January 2020, a total of 53 people have now died in flooding and landslides in Greater Jakarta since disaster first struck on 01 January, 2020. Also as of 04 January, 173,000 people had been displaced from their homes, according to AHA Centre.

Local TV reported that the Messalo, Megaruma and Montepuez rivers were all above flood alert, endangering over 60,000 people living close to the river banks.

Flooding wiped out an important bridge over the Montepuez River in Ancuabe district of Cabo Delgado, cutting road connections and leaving many of the provinces northern districts isolated.

The International Organization for Migration (IOM) in Mozambique said that the heavy rains damaged or destroyed dozens of shelters of Internally Displaced Populations (IDPs) in Chuiba transitional centre near Pemba city.

Heavy rain also affected parts of the country in mid-December. IOM conducted rapid assessment in 55 resettlement sites across Sofala and Manica provinces after the heavy rain on 10 December 2019.

IOM said that, “in total, 151 upgraded shelters, 91 emergency shelters and 257 tents were completely destroyed due to the heavy rain. IOM identified that an additional 150 shelters (upgraded, emergency shelters and tents) had major structural damages to walls and/or roofing, 3,608 shelters were partially damaged (including those shelters that were flooded) and 305 latrines were damaged.”

Disaster Authorities Respond to #Floods and #Landslides in #Peru 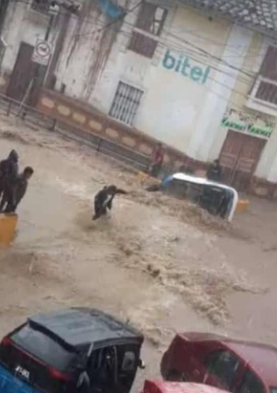 Disaster authorities in Peru are responding to incidents of flooding and landslides caused by heavy rain over the last 7 days.

On 28 December heavy rain in Junín department triggered a landslide in Ahuac district, destroying 19 homes and damaging over 30 others. At least person was injured but there were no reports of fatalities.

Flooding was reported in the the department of Cajamarca. Two homes were destroyed, 17 damaged and around 60 people affected by floods in Cajabamba province on 29 December. Around the same time flooding in Gregorio Pita district in San Marcos province destroyed 2 houses and left 6 people homeless.

Peru’s Civil Defense (National Institute of Civil Defense – Indeci) has activated contingency plans in Piura Department after flooding and heavy rain on 29 December 2019. Indeci reported that flooding in the districts of Piura, Catacaos, Cura Mori, Castilla, La Arena, Tambo Grande and Twenty Six of October. Teams working with motorized pumping equipment have been deployed to the area. Roads have been blocked and some houses damaged, although authorities are yet to fully assess the damage.

Deadly #FlashFloods and record #rainfall in #Tennessee and #Alabama, #USA

Storms brought record rainfall to parts of Tennessee and Alabama from 29 December, causing flash flooding in which 2 people died.

In Tennessee, several roads were closed in Williamson County, where the Emergency Management Agency reported 2 water rescues. One person was rescued from a flooded home in Maury County. One person died after being swept away by flood waters in Gallatin, Sumner County, on 30 December, 2019.

Meanwhile in Alabama, one person died after a vehicle was submerged in flood waters in Anderson in Lauderdale County on 29 December. Two other vehicles were recovered, and those drivers were uninjured.

Flooding hit the villages of Pematang and Hatapang in North Labuhan Batu Regency on 29 December, 2019.

It is thought that the 5 missing are all from the same family. The disaster occurred when their home in Pematang was swept away by the flooding. In total the floods destroyed 9 houses and damaged 17 others, according to disaster authorities. Some residents have been evacuated to safer ground. Bridges were also destroyed, leaving communities isolated, in particular in the village of Hatapang.

Indonesia’s Meteorology Climatology and Geophysics Agency (BMKG) has forecast moderate to heavy rainfall in the region for the coming days.