A storm system packing tennis ball-sized hail, damaging winds and heavy rains swept through northeast North Dakota and northwestern Minnesota Saturday evening.
The National Weather Service in Grand Forks issued multiple severe thunderstorm warnings late Saturday afternoon in north central North Dakota and through the evening as storms moved into the Red River Valley. Tornado warnings also were issued for Eddy and Wells counties.
Estimated winds topped 60 mph and the weather service received reports in North Dakota of tennis ball-sized hail and tree damage in Northwood, while golfball-sized hail was reported in Michigan and in the Larimore area.
Severe storms with hail also swept through Petersburg, Hatton, Mayville and Hillsboro.
The storms largely bypassed Grand Forks, where winds topped out at 21 mph and about a third of an inch of rain dropped by 8:53 p.m.
WDAY Meteorologist Aaron White said there were funnel cloud sightings south of Carrington and a tornado warning had been issued for Foster and Stutsman counties.
The weather service said storms were expected to subside overnight, but Sunday and Monday are also expected to bring thunderstorms.
The weather service said thunderstorms are expected to develop Sunday afternoon and into the early evening, with “an elevated risk for excessive rainfall and potential flooding” across the region. More thunderstorms, which could drop more than 2 inches of rain, also are expected to develop on Monday afternoon.
Courtesy of grandforksherald.com
http://tinyurl.com/ht6tl76
May 25, 2016

Funnel Clouds Appear During Thunderstorms In Parts Of The UK

Severe storms swept through the Chicago area Sunday afternoon and evening, leaving a path of destruction in their wake.
Officials from National Weather Service determined that damage in Grayslake was caused by a tornado.
The Grayslake fire chief confirms significant damage to the roof at Grayslake Central High School. The storm scattered drywall and other debris across the community and road signs were bent over.

A funnel cloud spotted north of Libertyville. (Credit: Lake County EMA)
Anthony Karla-Tiras, owner of Bake Sports & Grill in Grayslake, says he had about 24-26 customers when the storms came through Sunday evening and they all took shelter in the basement.
“It was almost like a war going on in the parking lot and then we saw the Warren Electric roof start flying all over, everywhere and now it is a disaster in the back of the building,” Karla-Tires said.

At Annette Jones’ home, a tree was knocked down and took down a portion of the roof. She was in the basement at the time the winds blew through.
“Then it got really loud and I went upstairs and nobody was home and that’s when I realized what was going on because I never heard an alarm, I never heard anything,” Jones said.
Some neighbors say an emergency cell phone text alert was the only warning they received and that showed up minutes after the front rolled through.
CBS 2 has reached out to local police and fire fighters to find out what happened with the emergency sirens. We have not gotten a response.
There were no reports of injuries on Grayslake.

The roof of a business in Grayslake peeled off and ended up in the parking lot Bake’s Bar and Grill. (Credit: Bernie Tafoya)
In Wood Dale, one man was killed and more than a dozen others injured after high winds collapsed a tent at the Wood Dale Prairie Festival. The victim has been identified as 35-year-old Steven Nincic.
The storms toppled trees in Rogers Park, with one tree crushing the roof of a car near Glenlake and Paulina. Another downed tree knocked out power to the intersection of Rockwell and Touhy.
The Department of Streets and Sanitation sent out more than 150 workers in response. There were more than 500 weather related emergency calls Sunday night.
Mayor Emanuel got a first-hand look at the damage on Lunt Avenue near Sheridan Road where a large sycamore tree fell, blocking the street.
Emanuel says they should have the entire neighborhood cleaned up by the end of the week.
“This type of damage is obviously quite severe when you can see a 50-year-old like this just totally roots and all uprooted,” he said. “I’ve been in touch with the governor personally, Senator Durbin, Senator Kirk and asking about a way to see if there’s a way to claim this area and areas that have been effected as disaster.”

Storm damage in Rogers Park. (Credit: Adam Davis.)
In Rosemont, the storm ripped through the Dome at the Ballpark, which housed two softball fields.

A dome covering athletic fields in Rosemont collapses from the thunderstorms. (Credit: Doug Meffley)
As of 9:48 a.m., ComEd reports there were 16,000 customers still without power.
The storms also forced the Appaloosa music festival in Grant Park to evacuate for over an hour Sunday afternoon. The festival also ended a half hour early.
Courtesy of chicago.cbslocal.com
http://goo.gl/Ok5bTU
August 10, 2014

The storm is impacting the St. John’s metro area and should continue to do so for the next hour.

“Doppler radar indicates that some of theses cells appear to have embedded rotation,” added the agency. “In addition, potentially damaging winds up to 80 km/h with heavy rain giving amounts in excess of 20 mm and large hail may be associated with these storms.”
“St. John’s typically sees less than five thunderstorm days per year, and severe thunderstorm warnings for the area are quite rare,” explained Weather Network meteorologist Tyler Hamilton. “The marine climate normally inhibits severe storms, but occasionally the atmosphere can  become unstable over Newfoundland which would favour convective activity.”
And in a relatively rare event, residents of Mt. Pearl reported spotting a funnel cloud Saturday afternoon. Check out the stunning images below. 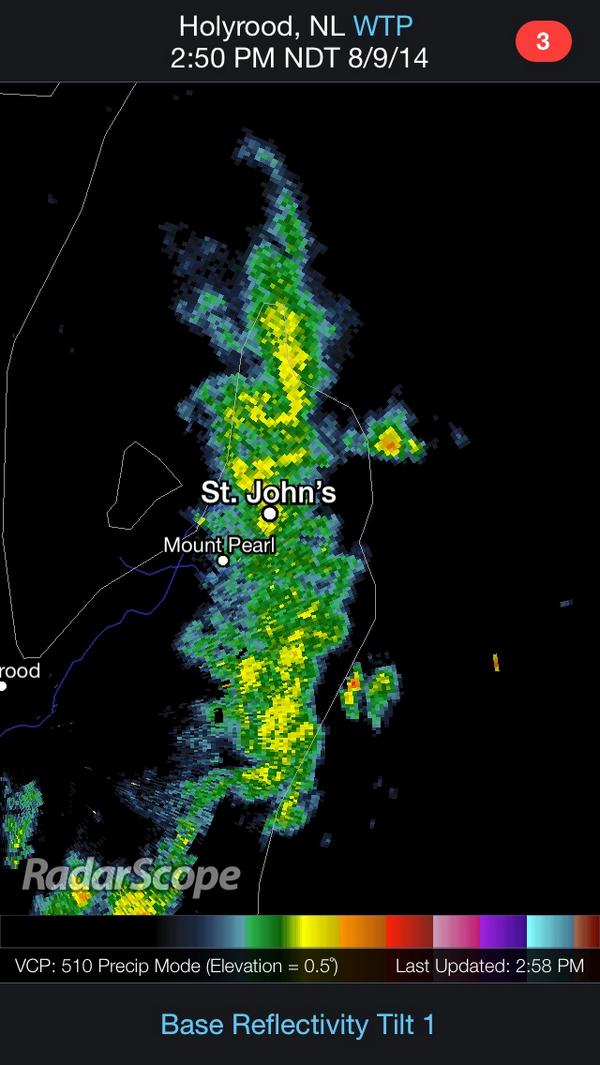 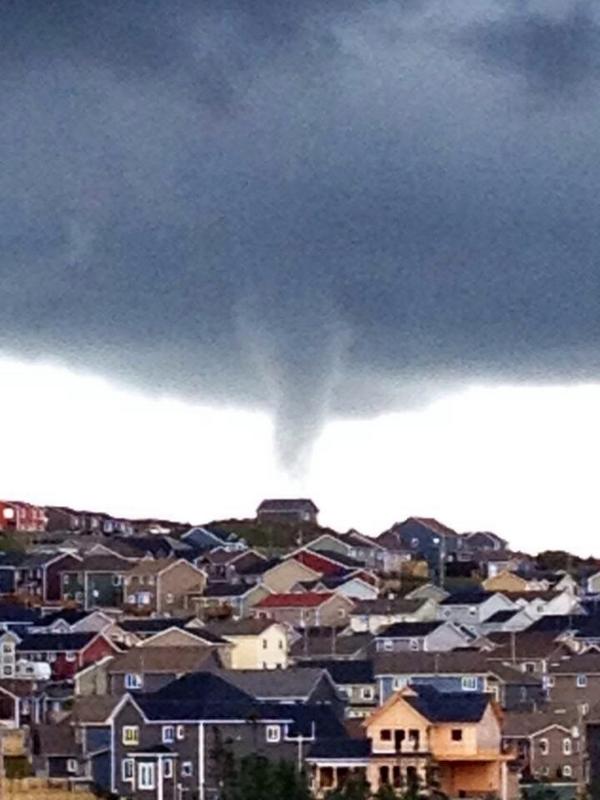 Stunning shot of a funnel cloud above Paradise 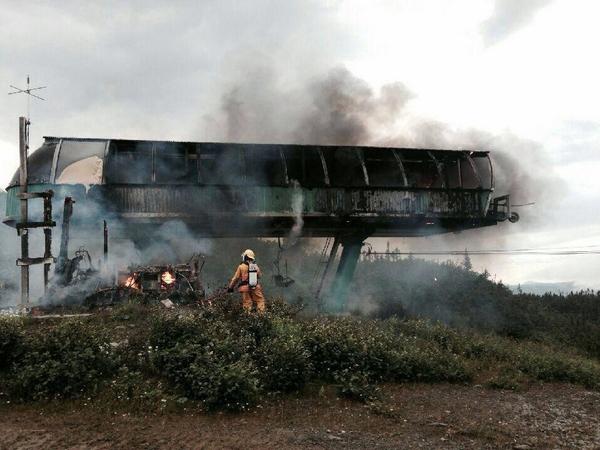 The chairlift at Marble Mountain. Really shows the destructive power of lightning
http://tinyurl.com/ost6q7z