4 Dead After #Storms and #Floods in #KwaZulu-#Natal, #SouthAfrica

Storms and heavy rain from 11 November caused flash flooding in areas of KwaZulu-Natal province in South Africa, including Durban and the eThekwini Metropolitan Municipality.

Ethekwini Mayor Mxolisi Kaunda confirmed that 2 people died in their home in Inanda after a wall collapsed as a result of the heavy rain.

The mayor urged precaution, in particular for drivers. He also urged members of the community not to throw garbage in the drainage systems.

The M4 Highway was closed between Umhlanga and Sibaya due to flood damage.

The area has also seen strong winds which have damaged homes and downed trees and power lines, cutting electricity supply in several areas.

Disaster management authorities in Vietnam report flooding in central areas of the country after severe weather including strong winds, lightning and heavy rain from around 15 October, 2019.

Flooding affected the provinces of Nghệ An, Bình Định and Hà Tĩnh provinces. Three fatalities were reported in Nghệ An, where 5 houses were destroyed and 5,250 houses damaged by flood water. Wide areas of crops and aquatic farms have been damaged in the province. The heavy rain also triggered landslides which blocked important roads in several areas.

The fourth fatality was reported in Bình Định. Meanwhile in Hà Tĩnh Province, crops were damaged and schools closed in several districts. Disaster officials in Sri Lanka report that at least 5 people have died after heavy rainfall, lightning strikes, floods and landslides in several provinces of the country.

As of 23 October, 1,661 people were staying in 3 relief camps in Gampaha, Western Province, after flooding forced them from their homes.

The department has forecast further heavy rain, warning, “fairly heavy falls about 75 mm can be expected at some places in Central, Sabaragamuwa, Uva and North-western provinces and in Kaluthara, Batticaloa and Ampara districts.”

Despite the heavy rain only one river was above alert level, according to Sri Lanka’s Irrigation Department. As of 23 October 2019, the Kalu Ganga river in Millakanda (near Bulathsinhala), Kalutara District, stood at 5.58 metres, where alert level is 5 metres and major flood level is 8 metres.

Thunderstorms, heavy rain and flooding caused material damages in 5 governorates of Yemen over the past week.

The UN Office for the Coordination of Humanitarian Affairs (UN-OCHA) reported on 03 October that a total of 2,775 families have been affected by the floods in southern areas of the country since 27 September. As many as 1,329 families were affected in Lahj, 900 families in Aden, 508 in Abyan and 38 in Hadramaut.

Yemen Meteorological Services reported that 71mm of rain fell in Aden in 24 hours to 28 September, 2019.

Central areas of Yemen were also affected by the severe weather from 28 September. Around 59 families were affected in Marib City in Marib governorate and 190 families in Wusab As Safil District in Dhamar.

Thousands Displaced by #Floods in #Dakar and #Kaolack Regions, #Senegal

The International Federation of Red Cross And Red Crescent Societies (IFRC) reported on 02 October, 2019, that over almost 9,000 people have been affected and around 4,500 displaced by flooding and heavy rain in Senegal.

Six deaths were reported in Dakar Region, where 4 died as a result of lightning strikes and 2 from drowning in flood waters. Almost 50 people were also injured.

According to IFRC figures, a total of 500 households (around 4,500 people) have been displaced, including 136 households in Kaolack Region and 364 households in Dakar Region.

Furthermore, the flooding has led to widespread destruction of livelihoods, as farms fields have been washed away. The incident took place in the Chohara region in the Kayath Thatch meadows in Sandashi panchayat.

The shepherds were camping in the open when lightning struck them. They have asked the government to be compensated in some way for the loss.

The state has been experiencing dry weather in most parts while some areas have had thundershowers.

Farmers in Sudi were in great sorrow following the incident. Lightning struck the sheep at Bhujawada pasture land following an incessant rainfall.

Rearing sheep has been a major income source for the farmers of Karnali. Mahabir Rawat, a local of the village said that sheep belonging to Nunilal Rawat, Lal Bahadur Rawat, Jayalal Rawat, Banche Rawat and Dev Bahadur Rawat, were killed in lightning.

Snowfalls and lightning have been causing a huge loss to the sheep farmers for the past few years. In winter last year, hundreds of sheep were killed due to heavy snowfall.

Farmer Banshe Rawat said that his family members were in great trouble after they lost their sheep in the lightning “Sheep farming has remained a major source of income to sustain our livelihood and provide education to the children,” he said.

Hundreds of #animals dead from #storms in #Spain 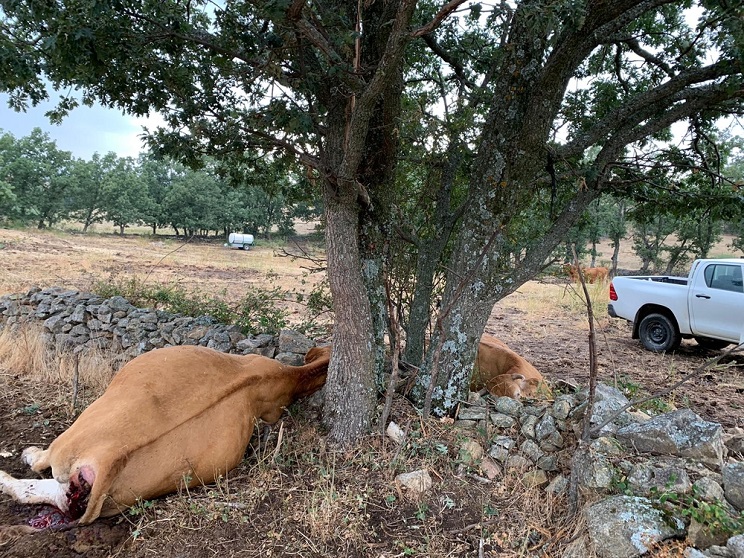 Several heads of cattle die as a result of lightning in Ávila. / ASAJA

From cows to small birds. The storms of the past few days have claimed the lives of hundreds of animals in Spain, as witnessed by the videos that these days collapse social networks.

The strong storms that fell during the afternoon last Monday left hard images in many municipalities of the Spanish geography. Social networks were filled in a matter of minutes of photographs and videos in which you could see the great ice balls left by hailstorm in different parts of the country, many of them destroying crops and wildlife. In some cases, the size of the balls was similar to that of golf balls, a lethal weapon capable of killing animals of all kinds.

The following video is really bleak. It is recorded in the Jiennense town of La Puerta de Segura and shows how a devastating hail storm ended up with hundreds of birds in the place . As the person recording the video progresses, dozens of birds per meter can be seen killed by the impacts of hail.

On the other hand, livestock deaths due to lightning strikes and stream overflows must also be regretted. This is the case, for example, of Ávila, where ASAJA has requested the support of all administrations to deal with the large damages that it now has to face after the storms.

In this province, ranchers from towns such as Villafranca de la Sierra or Santa María de los Caballeros have seen some of their cattle die as a result of lightning strikes on their farms.