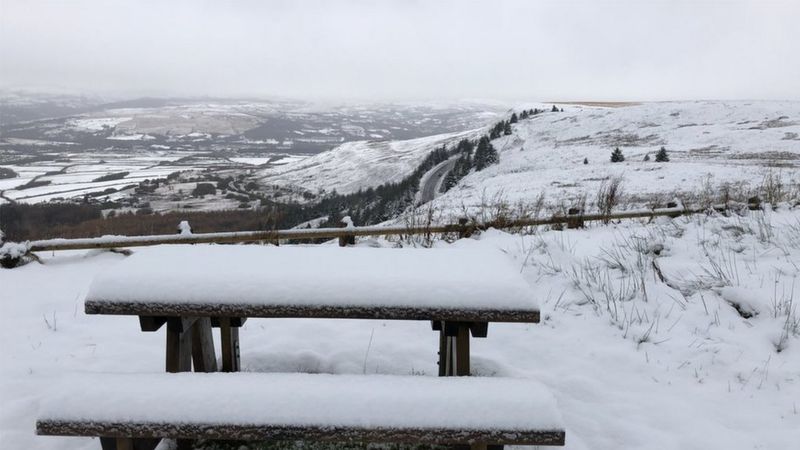 A layer of snow covers the mountains near Rhigos

Snow has fallen in some parts of the UK, causing trouble on the roads.

Areas like Gloucestershire, parts of Wiltshire, Bath and South Wales have seen a few centimetres of snow fall.

A yellow weather warning has been in place in some areas, with local services asking people to take care when travelling.

Some trains, cars and planes have been delayed by snow too.

There have been no reports of schools closing because of the snow.

Weather experts have said there may be more snow in areas where the ground is higher, like the Peak District and Brecon Beacons.

However, the snow might soon turn to rain in places like Nottingham, Sheffield and Doncaster as a yellow weather warning for rain is in place.

These are areas which have already been affected by heavy flooding.

Crew from the 3-5 Pigadia ski resort on Mount Vermio near Naoussa plow the roads around the premises. Photo from 3-5 Pigadia’s Facebook page

Most of the ski resorts and villages in northern Greece’s mountainous regions woke up on Wednesday under a thick white blanket of fresh snow.

Ski resorts and villages in the counties of Imathia, Florina, Kozani, and Grevena as well as other locales in the central and northern parts of the country saw extensive snowfall, particularly during the early morning hours of Wednesday.

The ski resort of 3-5 Pigadia in Naoussa received more than 40 centimeters (16 inches) of snow, with even larger amounts of snow being seen in the high altitudes around Florina, West Macedonia.

This was the first proper snow that has fallen for this winter season in most of these ski resorts, which are now getting ready to welcome their first skiers before Christmas.

The sudden heavy, wet snowfall was a result of the weather front ”Dido” which has affected most regions of Greece with strong winds and large amounts of precipitation.

The weather is expected to gradually brighten up beginning on Thursday.

A mammoth winter storm that struck only Monday evening and buried some parts of Colorado under historic record snowfall began to leave the state Tuesday afternoon. It’s headed towards neighboring Nebraska to inflict its snowy misery on the Cornhusker State.

Colorado weathermen, however, are keeping their eyes on a second snowstorm system expected to arrive Friday. They predict a cold and dry Thanksgiving with lots of snow.

Monday’s winter storm dumped historic snowfall on Boulder and Fort Collins, said local TV station CBS4. Weathermen said many areas along the Front Range experienced the most snow in three years. Among these were the community of Drake with 33 inches of snow; Livermore with 32 inches; and Coal Creek Canyon with 30 inches.

Hundreds of flights to and from DIA were canceled Tuesday as maintenance crews worked feverishly to clear heavy snow from runways. DIA is the largest airport in North America by total land area and the second largest in the world.

More than 1,100 passengers were forced to spend Monday evening at the airport due to the heavy snowstorm, said airport spokeswoman Alex Renteria. She said airport employees handed out blankets, baby formula and diapers to stranded passengers while restaurants stayed open past their usual closing time to serve those stranded.

Oddly, and despite the snowstorm, most ski areas in Colorado have seen less snow than Denver and the Front Range. Local media said there is still plenty of fresh powder on the mountains ahead of Thanksgiving.

The Albuquerque area shattered the previous record for snowfall in what was the snowiest Thanksgiving in the city’s history.

And it wasn’t even close.

By mid-day Thursday, there had been 3.9 inches recorded at the Albuquerque International Sunport, which is the city’s official climate site, said Alyssa Clements, a meteorologist for the National Weather Service in Albuquerque.

That measurement far surpassed what had been the previous snowiest Thanksgiving, which was way back in 1934 when the city had 1.5 inches of snow on Thanksgiving, she said.

And the airport’s reading was actually one of the lower snowfall accumulations recorded in the city, Clements said.

The entire city was blanketed with 4 to 6 inches of snow. Several places on the West Side recorded 7 inches, she said.

The area around Academy and Tramway had a whopping 8 inches of snowfall by Thanksgiving afternoon. That was the highest recording in city limits.

The last time Albuquerque had a white Thanksgiving was in 2010, when there was a paltry-by-comparison 0.3 of an inch of snow.

Clements said other areas in the state also saw lots of snow.

Sandia Park had between 10 and 12 inches of snow, Glorieta had over 9 inches and Santa Fe had between 6 and 8 inches.

Despite the high amount of snowfall throughout the state, roads conditions stayed relatively good throughout the day. By Thursday afternoon, the New Mexico Department of Transportation had upgraded driving conditions from difficult to fair.